On Thursday, May 16th and after many delays on the few flights to West Africa, I arrived in Sierra Leone’s capital, Freetown. The name “Freetown” has been given to the city since the time of the slave trade. European slavers loaded the boats with African slaves into the city port under such miserable conditions that the human mind could not possibly capture, and headed for Brazil and America.

In 1807, when the English were forced to stop slave trade after the international community’s disapproval, the ships that had already set off for the new continent returned back and freed the captive slaves, who had now gained their freedom. The first free slaves landed in Sierra Leone, and for this reason the capital of the country was named Freetown, which means the city that gave freedom to the enslaved Africans.

Among other things, Sierra Leone’s colonists made sure that the country’s airport was remote and inaccessible to protect it from any possible revolutionary attacks. So in order to get to the city after a difficult and long journey (at best with two connecting flights) one has to board a high-speed boat or a ferry and cross the sea bay that separates the airport from the city. One is very lucky if the sea is calm without strong winds or the tropical storms of the Equator.

Once again, by the grace of God, the protection of Our Most Holy Lady and the blessings of our Patriarch, I arrived at the port of Freetown safe and sound. There I was received by Fr. Themistocles Adamopoulos and the holy clergy of Sierra Leone. Due to the delays and the local conditions, time had already passed, so we headed straight to our lodging.

Friday rolled along smoothly overseeing school complexes, the Academy, and having contact with teachers, youth and volunteers. In the afternoon we conducted the Vespers service at the Church of Saints Constantine and Helen.

On Saturday, May 18, the Divine Liturgy was celebrated at the Church of St. Moses the Black. During the service, we had two ordinations: one of Deacon Athanasius Sesay as an Elder and another of the teacher David Tholey to the Diaconate. Addressing the young clergy, I emphasized the importance of humility, prayer, obedience, reaching out to others for Christ and giving out of selfless love.

After the Divine Liturgy, His Eminence distributed sweets to young children and then visited all the areas of the Mission Center including orphanages and nursing homes, talked with all the teachers as well as with the foster mothers who take care of the orphans. What followed was a festive event in the large event hall.

On Sunday, His Eminence conducted the Divine Liturgy and preached the Word of God at the Church of St. Eleftherios. After the dismissal, he blessed the food that was offered to more than a thousand people. In the afternoon he performed the Blessing service at the newly built Orphanage within the premises of the Saints Constantine and Helen Mission Center. After that, he was shown around the orphanage, which will soon begin operating under the care and supervision of Ms. Mary Adams, an Australian volunteer teacher. In the orphanage courtyard the youth organized a very beautiful and successful festive event. The heavy tropical rain that broke out so unexpectedly made the festivities stop, but after about 60 minutes they were continued with gaiety and enthusiasm. Then a dinner of love was offered to all the young men and women of our Church in Sierra Leone.

On Monday morning, May 20, His Eminence visited the Orthodox Schools, and talked with both students and teachers. Next he met with the holy clergy of the country and gave proper counsels and instructions.

In the afternoon he officiated in the festive Vespers Service at the Church of Saints Constantine and Helen.

On the feast day of the Equal-to- the- Apostles, Kings and Emperors Constantine and Helen, His Eminence celebrated the Divine Liturgy and preached the Word of God at the namesake celebrating church. During the Divine Liturgy he ordained as Elder Deacon Soterios and as Deacon Teacher Emmanuel Tonkie. In his address, His Eminence referred to the great figures of the celebrated Saints, to the historic Decree of Independence issued by Emperor Constantine which ended, among others, the long and catastrophic persecution of Christians, and to the great contribution of his Mother Helen, including her finding the Holy Cross of our Lord. Finally, he exhorted the new clergy to have the celebrated Saints and all the Saints of our Church as bright examples in their lives and to be the best example for their flock themselves. After the Divine Liturgy, a meal of love was offered to the whole congregation. 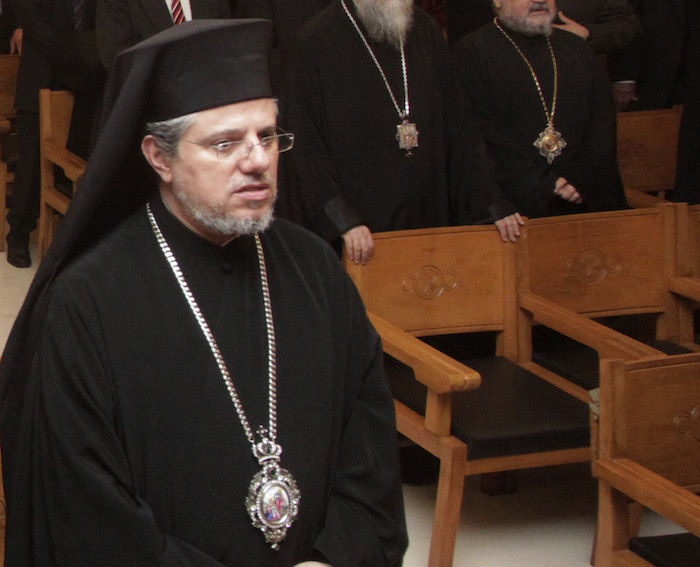 His Eminence bishop George of Guinea was born in 1966. He has been serving the Orthodox Missons in Africa since 1993, while in 2001 he was ordained the bishop of Niloupolis. In 2004 he was moved to Zimbabew, in 2010 to Ghana and in 2012 to Guinea. Since 2010 he has been serving as the Exarch of the Patriarchate of Alexandria in Athens.