Looking through the mud huts

My most recent mission to Madagascar has been indelibly printed on my memory. I begin my narration with what made me the greatest impression: the importance of the relation of our country, which is currently being afflicted verging on a humanistic crisis, with the poorer peoples.

Although our society is undergoing a violent decline, one can distinguish the incredible grandeur of the Greek soul, which continues to embrace and help the much-afflicted peoples of the universe despite its slender means.

The schedule of our stay in the country involved daily expeditions to several villages of the province of its capital city, Antananarivo.

Those with problems with their eyesight that ran to the surgery were examined and received medical and pharmaceutical care. At the same time the right glasses for each case of long or short-sightedness were provided.

The people we associated with repaid our visit with their smile, simplicity and gratitude.

However, we visited regions where the living conditions were very hard. This is something one could feel right away from the scenes of daily life.
One had the feeling of descending a lot of steps of poverty and deprivation at the sight of the fear and the despair on these people’s faces. Their eyes mirrored mixed feelings of abandonment, isolation, condemnation to a life where survival ranged from hard to impossible.
Every time our eyes met theirs there was a big WHY coming out, looking for an answer that has never been given.

At times the route scenes alternated with milder ones. Such a picture came into view on the broad horizon: a village with little mud houses built up on a hill, on top of which dominated and complemented the scenery a whitewashed Greek-Orthodox church.

Another cross, another conquest of love on the distant island of the Indian Ocean! Another village was filled with the sweetness of the spiritual light- a light like that of the Resurrection which gives hope and reforms every man.

The Mission work in Madagascar is magnificent. It numbers 90 parishes throughout the island. It has managed to reform local communities within the few years of its existence.

The children of Greece are experiencing a declining state; and yet, they continue to help the children of Madagascar from the little they have and do not cease understanding them and sympathizing more with them.

It is paradoxical the fact that now that the lights of a virtual prosperity are coming down, we can see more clearly, being able to perceive more directly other peoples’ difficulties, which we no longer pass by but we see them as an invisible link that connects us all together.

We, modern Greeks, have a moral duty towards our History, which is being tested once more:

We need to regain our strength and take care anew of the spiritual as well as the natural tree of our Country, in order to move again from a harsh winter to a blooming spring, sending out its scents and its cool breeze all over the world. 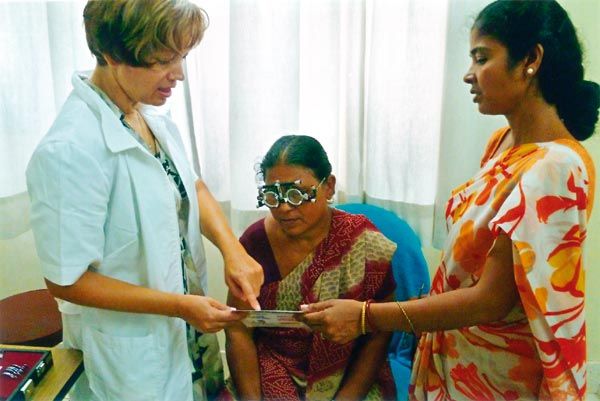 Katerina Alexandrou is an eye surgeon living in Thessaloniki. She has visited and offered her medical services in the Orthodox Missions in India, Indonesia, Madagascar, Zimbabwe, Congo (DRC) and Uganda. Since 2018, she has been a member of our Fraternity's Board of Directors.